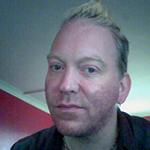 Nick Myles studied Directing at City Lit, and Scriptwriting at City University (MA with Distinction). As a director he has worked at Soho Theatre, Arcola, Camden People’s Theatre and The Space. His plays have been performed at numerous venues including Arcola, Riverside Studios, Etcetera Theatre, Old Red Lion and in 2012 his work made the finals of both RedFest and the Off Cut Festival (“***** – deserves to win” Everything Theatre). He has also worked as a script reader for Writer’s Avenueand The Space, and as a talent scout for BBC Writersroom.