This section of the site shows the testimonials that ART has received in its short history. We have received television coverage (twice) in Poland. In addition, we were favourably covered in newspapers and on radio programmes in Poland and the Czech Republic. Schools we visited also wrote to us praising our efforts and awarded certificates to the individual actors– some of the certificates are shown here. We have also received newspaper coverage in the Oxford Mail.

These testimonials are shown below.
We were also ‘followed’ on one of our visits and an edited version of our workshops appeared on national TV in Poland. This is shown below.

A longer documentary was made when we returned in 2015. 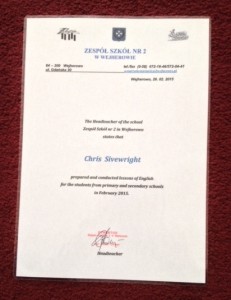 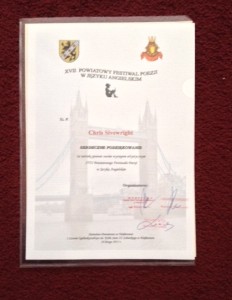 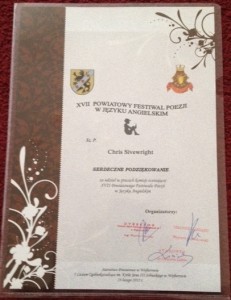 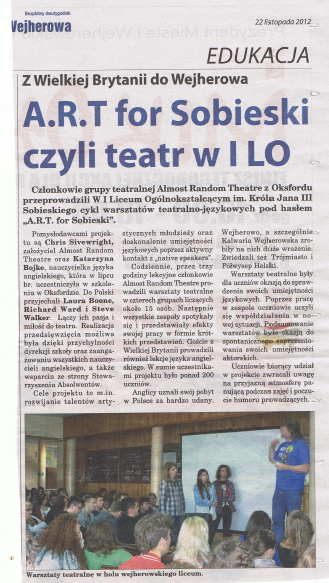 From Great Britain to Wejherowo

A.R.T. for Sobieski – a theatre in secondary school no 1

Chris Sivewright, a founder of Almost Random Theatre, and Katarzyna Bojke, an English teacher who took part in a teacher training course in Oxford in July, initiated the project. Laura Boone, Richard Ward and Laura Boone came to Poland. All of them are share a passion for  theatre. The project accomplishment was possible thanks to the cooperation of the school head and all English teachers and Alumni Association funding.

The aims of the project were not only developing creativity and artistic talents of young people, but also improving their language skills by interaction with native speakers.

Every morning, Almost Random Theatre members were running drama workshops in four groups of about 15 students. After that all the groups came together to present the results of their work. The guests from Great Britain also conducted lessons of English in the afternoons. On the whole, there were more than 200 students who participated in the project.

The British were happy with their stay in Poland. They were impressed with Wejherowo, especially the Calvary. They visited Tricity and Hel Peninsula.

For students drama workshops were a great opportunity to check their English and also work in a team. Improvisations on the last day of the project were a chance to present their acting abilities. The students appreciated great atmosphere during workshops and British sense of humour.

Develop talents from the British

Teacher Catherine scrimmage after a visit to Oxford on training Comenius launched a new project, activating students in international relations.

WI High School. King Jan III Sobieski in Wejherowo organized an unusual project.Members of the theater group Almost Random Theatre at Oxford conducted a series of workshops, theater and language under the motto “ART for Sobieski.” originator of the project was Chris Sivewright , founder of Almost Random Theatre and Catherine fight, a teacher of English. The very idea was born in July during training in Oxford, attended by Catherine fight. Chris Sivewright addition, the Polish came Laura Boone, Richard Ward and Steve Walker .

- These are the people who have the enthusiasm, passion and love for the theater – the teacher explains. – A realization of the whole project was made possible by the involvement of school management and teachers of English.

The aim of the project was to develop their artistic talents of young people and improve their language skills through active contact with the “native speakers.” Every day for three hours per Almost Random Theatre members conducted theater workshops in four groups of 15 persons. Then the teams met and presented the results of their work in the form of short performances. In addition to the workshops, visitors from the UK conducted English lessons. In total, the participants were more than 200 students.

– Recognize the British stay in Poland for a very successful – the teacher adds. – Wejherowo and Calvary made a big impression on them.

Guests visited the Museum of the City of Gdynia, Sopot Pier, the exhibition “Roads to Freedom” in Gdansk and the Hel Peninsula and saw the performance of “39 degrees” in the Musical Theatre in Gdynia.

Theater workshops for students have an opportunity to test their language skills. Youth emphasized that English classes helped to develop their communication skills, and deepen their knowledge about the cultural aspects of the United Kingdom. Alumni Association supported the project financially. 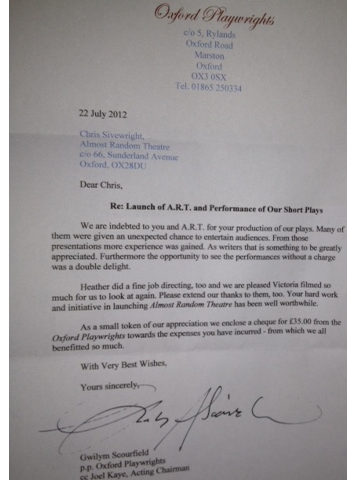 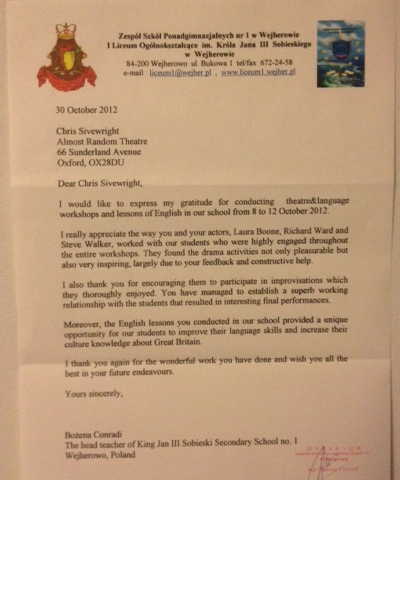 Thank you very much for the drama workshop you organized yesterday with my Spanish students. It was very interesting to see how my students interacted with your actors in a great series of improvised drama activities and games. Great experience!!! 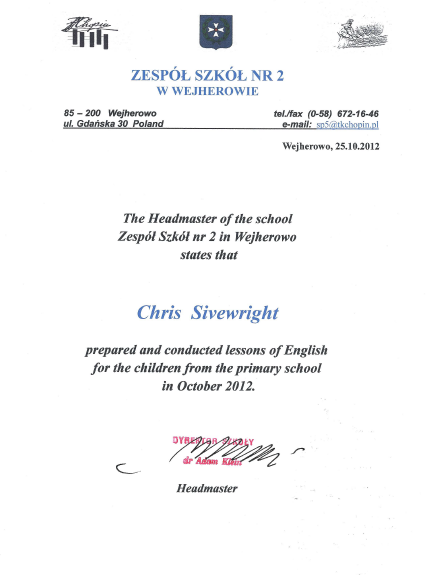 Testimonials from Visit to Czech Republic 2013 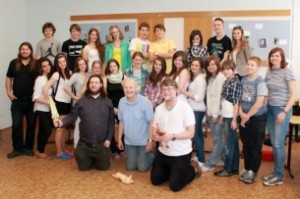 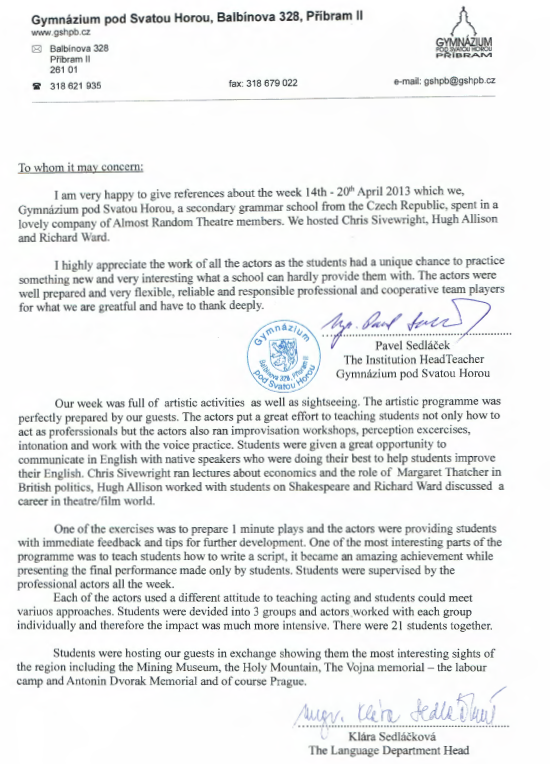 The visit by Almost Random Theatre written by Klára Sedláčková and Tomas Bilek of the Holy Mountain High School.

Students of Gymnázium pod Svatou Horou had an opportunity to try unusual way of learning of the English Language. Our school was visited by Chris Sivewright, Hugh Allison and Richard Ward, actors from Almost Random Theatre who were working with our students teaching them to act during the third week in April.

Our students were learning to improvise, to write a script, to do creative writing and also acting of course. Nothing unusual at our school, the only communicative language was English, though.

Intensive work of our guests was compensated by the afternoon region sightseeing or seeing the Mining Museum.

Even the most timid students started talking during the week. The final year students did not stay aside, they joined the lessons about actor life in Great Britain, William Shakespeare, and also Margaret Thatcher.

The week project was entertainment and learning at the same time but mainly it was a motivation for the further study of the English language. 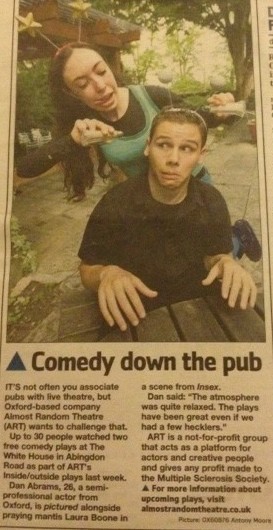 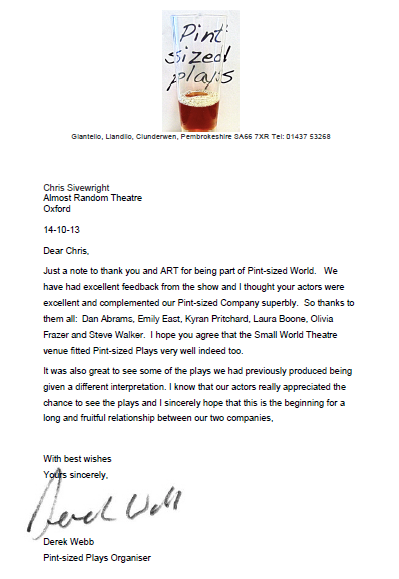 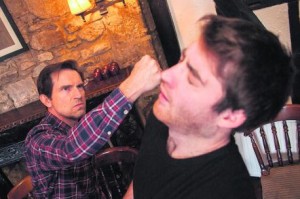 Six new plays in two days is a massive undertaking by anyone’s standards, let alone for someone who has a full-time job.

But having started the Random Theatre Company to showcase his own work, Chris Sivewright decided to give other wannabe playwrights the chance to stage their plays by running a national competition. The theme was ‘wellbeing and retreats’ and you’ll be able to see the results for yourself on Monday and Tuesday at the Burton Taylor Theatre.

The winners, and Chris’s own work, will be debuted for the first time right here in Oxford using professional actors.

This has definitely been a labour of love, but the wealth of entries surprised even Chris, because although the theme was fairly specific, the subject matter varied enormously.

“One submitted play was all about suicide as a retreat from life, while another featured soldiers retreating from a battle,” Chris laughs, “which obviously didn’t really fit in with our ‘wellbeing’ theme.”

Instead, the winners plays featured everything from a school assembly to extra-marital affairs, undercover cops, gangsters, homelessness and wife swapping, which should keep you all on the edge of your seats.

“It’s been a massive challenge,” Chris, a tutorial college teacher admits. “But a great way to involve everybody from the actors to the writers and directors in the finished product. So while it’s a big gamble, it’s something I really wanted to do, And where better than Oxford?”

Playwright Jonathan Skinner, whose entry Kind was a winner, said staging his play has been almost as exciting as winning the competition itself.

“I’m absolutely delighted,” he says. “And having a theme really helped creatively because the hardest thing is starting from scratch with a blank piece of paper. This gave you the stimulus and a deadline to work to which was really helpful.”

So what next? “I have since adapted Kind into a 45-minute radio play and a full-length one act stage show, so the future looks bright,” Jonathan grins. “But in the meantime I’ve got to get over my first night nerves, because although I’m not acting in it, I do get nervous.”

SEE IT
Two evenings of new drama – never performed before – by Almost Random Theatre take place on Monday and Tuesday at the Burton Taylor Studio. 01865 305305. oxfordplayhouse.com 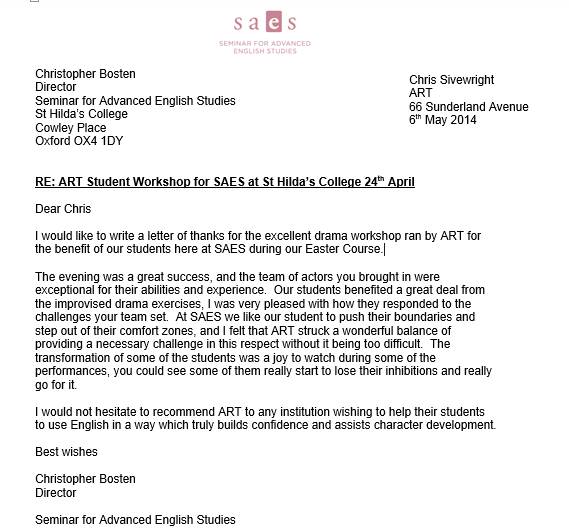 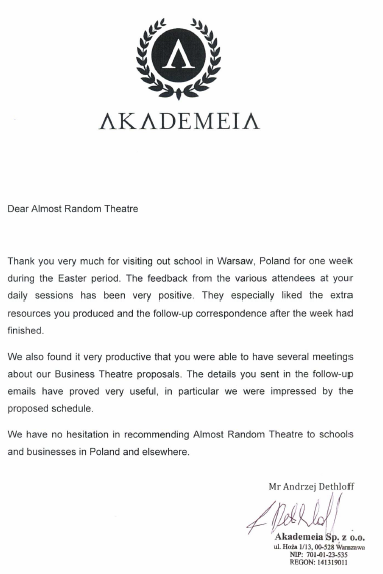 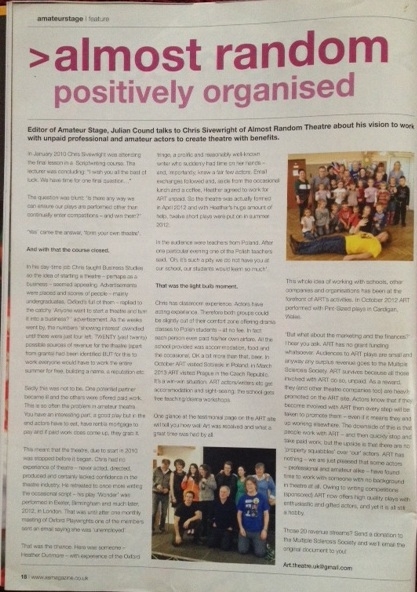 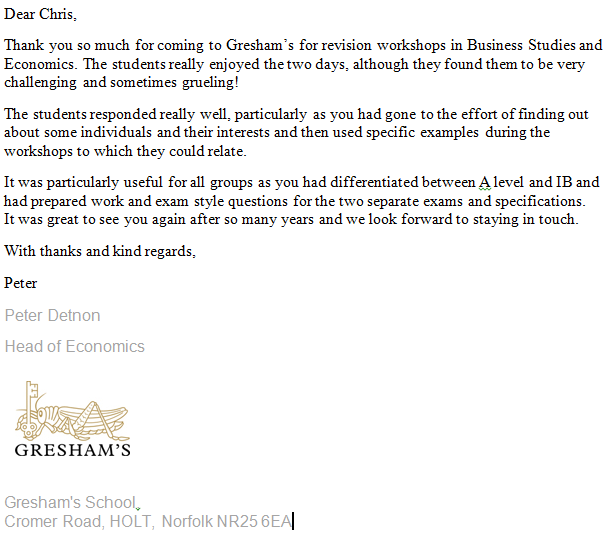